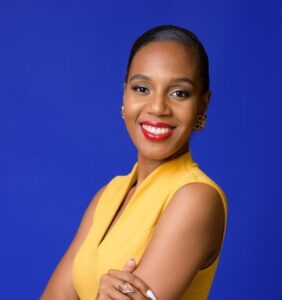 From adding the zest to Jamaica’s top television shows, to tactfully addressing country leaders and dignitaries, Dr Terri-Karelle Reid embodies “The Human Ethernet”; the connector of people and dots.

Terri-Karelle has commanded diverse audiences across the Caribbean, Europe, Asia, and the USA with her highly animated and charismatic personality. She has built a brand of excellence in the world of event hosting, speaking, online branding and storytelling. Today, this former Miss Jamaica World is one of the most sought after hosts for corporate and public events.

Terri-Karelle’s transition to the hosting spotlight was an unconventional one. After completing a Doctor of Veterinary Medicine in Cuba in 2007, Terri-Karelle faced cross-cultural accreditation challenges when she returned home, which resulted in her being unable to practice veterinary medicine in Jamaica. She wasn’t deterred and instead jumped head-on into marketing.

After working in a number of leadership roles in marketing and public relations, Terri-Karielle transitioned into media. After getting her start as a radio personality, she eventually landed on television in 2012, hosting the most-watched live television show in Jamaica – Digicel Rising. This was the turning point in her career that led to many more opportunities. Today you will find her hosting popular television shows, entertaining international crowds at cultural and music events, and interviewing some of the world’s most powerful and influential personalities.

With her infectious personality and welcoming persona, Terri-Karelle will connect the participants at this year’s conference as our energetic host, for the second time.