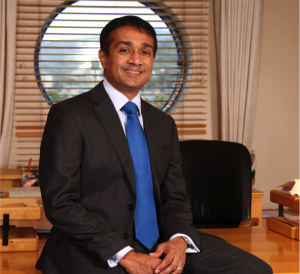 When it comes to insurance, no one knows it better than Mr. Ravi Tewari. As the Group CEO of the Guardian Group – one of the largest financial services organisations in the English and Dutch Caribbean – Mr. Terwari has over 25 years of experience in the industry.

He began his career in actuarial consulting and worked for several insurance clients throughout the Caribbean. On joining Guardian in 1998, he worked as a Valuation Actuary, where he played a pivotal role in several key acquisition projects that drove the rapid expansion of the Guardian Group.

Mr. Tewari holds directorships on the Guardian Holdings Board, Guardian Life of the Caribbean and other Group subsidiaries’ Boards, the Advanced Cardiovascular Institute and the Trinidad & Tobago Citizens Alliance Against Crime.

Mr. Tewari has worked in a number of environments throughout his career and has understood how a culture can be both an opportunity for growth and a hindrance. With this knowledge in mind, Mr. Tewari will present on, “Cultural Transformation – Using Culture to Drive Performance and Innovation”.