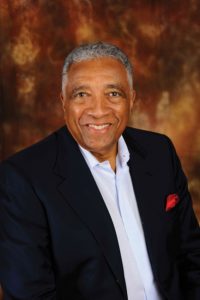 Sir Royston Hopkin, KCMG, has been leading the tourism industry for over 50 years and has rightfully claimed his place as one of Grenada’s most accomplished hoteliers. His skillful stewardship, dedication to providing excellent customer service and his ambitious vision, have made the Spice Island Beach Resort an internationally renowned and award-winning hotel.

But his success wasn’t without years of hard work and dedication.

Sir Hopkin began his hotelier and tourism career when he joined the family business in 1965, at the tender age of 20. 13 years later, he delved into entrepreneurship when he, along with his brothers, purchased the Blue Horizons Hotel.  Still seeking another challenge in 1986, he expanded the hotel to 32 rooms and renamed it the Blue Horizons Cottage Hotel. Arguably his most crucial acquisition would occur in 1987, when he purchased majority interest in the Spice Island Inn. Two years later he acquired all majority interest to become the Sole Owner/Chairman and Managing Director of the property. The hotel was later renamed the Spice Island Beach Resort as it’s locally and internationally known today.

Having a vision of excellence for his business, Sir Hopkin saw the need for significant investments. By 2000, the hotel had expanded to 66 elegant suites, and could now boast of a luxurious new spa, restaurant and bar.  By 2013, the hotel had undergone further upgrades, to maintain its competitiveness as a leading boutique resort and to provide the highest level of Caribbean luxury, on par with any major five-star resort in the world.

His many contributions to the industry have not gone unnoticed. Sir Hopkin is the recipient of several prestigious awards, including the coveted Caribbean Hotel Association’s “Hotelier of the Year” honour in 1991, Grenada’s Silver Anniversary Independence Award for 25 years of dedicated service, as well as numerous other awards from the Grenada Hotel Association, the Caribbean Hotel Association and other organizations. He is also the proud recipient of the 2019 AAA Five Diamond Award and the 2018 Six Star Diamond Award from the American Academy of Hospitality Sciences.

Sir Hopkin has also dedicated his time to the development of the industry and has supported numerous charitable causes. He is the former Chairman of the Caribbean Alliance for Sustainable Tourism (CAST), Honorary Director of the Caribbean Hotel & Tourism Association, Honorary Director of the Grenada Hotel & Tourism Association and Vice Chairman of the Board of Trustees of the Queen Elizabeth Home for Children.

With such an expansive and impressive portfolio, and with his continued dedication to providing excellence in the tourism industry, the Caribbean Leadership Series is honoured to have Sir Hopkin embark his knowledge by speaking on, “Sustaining Excellence – The Leadership Challenge.”